It took a water leak, a termite invasion, the intervention of city officials and the hard work of numerous volunteers, but Teresa Oliver is now finally back home. 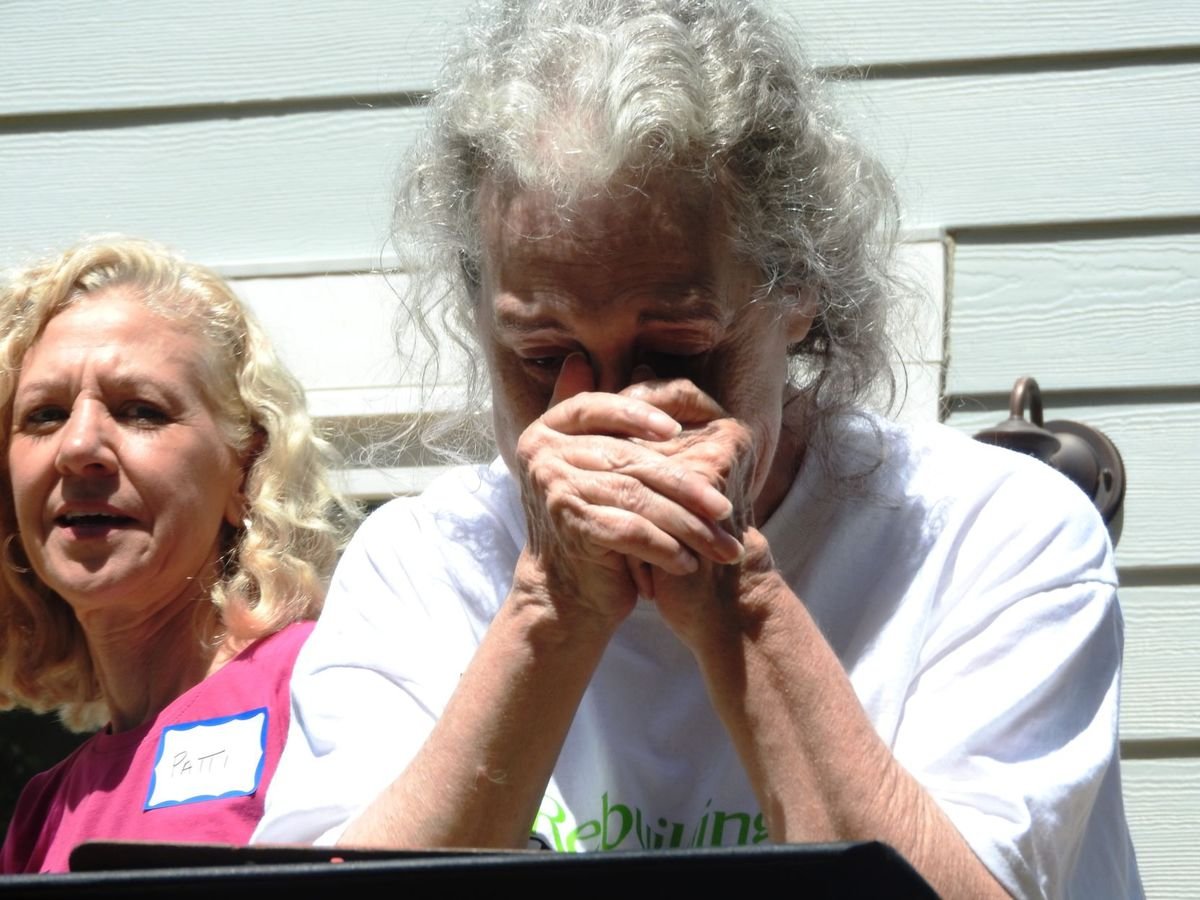 Oliver has lived in the two-bedroom, one-bathroom house at 4015 Woodland Drive in the City of Fairfax for 17 years, but June 28, 2017 was the first day that she could walk up the stairs to her backyard deck with ease.

Originally, the deck staircase had no handrails and fanned out at the bottom, making it difficult to climb for someone like Oliver, who has arthritis.

Now, a narrow set of stairs with easily accessible railings connect a honey-colored wooden deck to the gravel foot path that leads from the front of the house to the backyard.

“In all the years I’ve owned that house, I have not been able to walk up the steps like a normal human being,” Oliver said after demonstrating her newfound step-climbing ability. “It was always grab onto the post, one foot at a time, and hope I didn’t fall.”

The new deck staircase is just one of the transformations made to Oliver’s home, which she left nearly two years ago and officially returned to with her son, Michael, on June 29.

Oliver’s house was the latest renovation project for Rebuilding Together Arlington/Fairfax/Falls Church, the local branch of a nationwide nonprofit dedicated to doing repairs for low-income homeowners.

According to the organization’s website, the Fairfax affiliate of Rebuilding Together has mobilized 65,000 community volunteers since 1988 to assist 2,000 households with free labor worth more than $12.8 million.

However, the Oliver home turned out to be the most challenging project to date, Rebuilding Together Arlington/Fairfax/Falls Church executive director Patti Klein said at a June 29 ribbon-cutting ceremony.

The problems started with a leak in the kitchen.

When combined with a neighbor’s gutters that often flooded Oliver’s side yard, the leak resulted in water seeping into the house’s foundation, which in turn attracted termites.

The middle of the house began to sag, and Oliver accepted help from a couple of people who offered to repair her home. She hired them as contractors, believing that they were friends and had licenses.

She later realized that they were neither friends nor licensed contractors.

“They caught me when I was very desperate,” Oliver said. “I lost my brother to pancreatic cancer. I wasn’t dealing with the real world very good at that time, so they found themselves the perfect mark.”

In addition to defrauding Oliver, the supposed contractors ruined her house to the point that it had to be condemned, and she and her son had to move out, eventually winding up in a basement apartment in Annandale.

At the same time, the Olivers contacted City of Fairfax officials who she says fought hard to get the contractors to fix their mess, but when their efforts proved futile, Fairfax City human services coordinator Louise Armitage suggested Rebuilding Together as a better option.

Initially, Oliver resisted. She declared that she would rather take out a loan to fund the extensive repairs or even make them herself than accept charity.

“[Armitage] stopped me short: this is not a charity,” Oliver said. “She was so right.”

Rebuilding Together relies on volunteer labor and donations from both individual citizens and businesses, and 4015 Woodland Drive required an all-out effort by the community.

“We worked hard to make it a safe, accessible, and healthy home,” Bartlett said. “A lot of the design work went into making sure this relatively small home would accommodate this family for a very long time.”

Because the organization often assists people who are older or who have disabilities, Rebuilding Together emphasizes safety in all of its projects. The nonprofit has 25 priorities for safe and healthy housing, such as access to a working water heater and refrigerator or adequate lighting for rooms and stairwells.

Along with adding handrails to the front porch and backyard deck, Rebuilding Together made Oliver’s house more accessible by knocking out some walls to create more open space, switching out the bathtub for a shower with handholds, and putting latches on doors and cabinets instead of knobs, which are difficult for her to turn.

Renovations began in late February with more than 60 individual volunteers contributing at some point, including 17 people from the Wells Fargo Housing Foundation, which also gave the first and largest monetary donation of the project.

The other project sponsors included the City of Fairfax, the McLean Rotary Club Foundation, and the Fairfax United Methodist Church.

In addition to getting help from the Fairfax County Department of Community and Housing Development, which repaired the house gutters, Rebuilding Together received nearly $30,000 in donated supplies and services from various contractors.

The project team even did some landscaping for Oliver, planting irises, black-eyed Susans, lilacs and other flowers in a garden along the edge of the property.

“I don’t know how they knew it, but I used to be a gardener,” Oliver said. One of the worst things about this [arthritis] is I couldn’t garden anymore, but they gave me plants I could take care of.”

By the end of the project, Rebuilding Together volunteers had spent close to 2,400 hours working on the home, adding up to $146,000 just in volunteer labor.

Upon returning to her house for the first time in years, Oliver was awed not just by the building’s physical transformation, but by all of the energy and goodwill that went into making it possible. She recalled sitting outside the house and watching volunteers work early on in the renovation process.

“These people, they’re dirty, they’re sweaty, they’re tired, [and] they have had the time of their life,” Oliver said of the volunteers. “They are so happy, and I realized this is love your neighbor made manifest…I was so lucky to be that neighbor.”